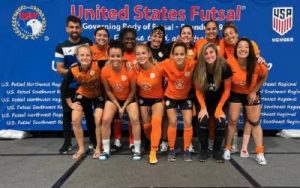 Atlantic City, New Jersey — The 35th U.S. Futsal National Championship concluded Sunday, July 11th after nineteen title matches and over four days of intense and exciting competition. The Biggest, Oldest and most Prestigious Futsal competition in the United States ended with teams from 5 different Regions reaching the finals. “This is great news”, said Alex Para, President of U.S. Futsal, “because it not only shows how much Futsal has come back after nearly two years of COVID -19, but how competitive it has become all across the United States”.  With the growth of Futsal accelerating so rapidly over the last ten years, so has this competition. Brazuca F.C teams from PAE got trophies in 4 categories. The Men’s Open competition was won by Utah Elite F.C from Utah, who played against Sporting Maryland F.C. from Maryland. which had won this division in 2011.  This is the second time in a row that Futsal Elite F.C has won the National Title. In the Women’s Open, category, Sudakos F.C. from Virginia won the women’s title.

The 35th National Championship was postponed from last year because of COVID – 19, so it was played this year during U.S. Futsal 40th Anniversary. All the games in every division over the course of this event were well played and attended by more than 4,000 participants and spectators.

Forty eight referees, from various locations across the country, were invited to participate in this tournament.

U.S. Futsal congratulates all the teams that participated in the 2021 U.S. Futsal National Championship for their hard work, dedication and “fair play” throughout the competition.

BELOW IS A LIST OF THE RESULTS OF THE U.S. FUTSAL NATIONAL CHAMPIONSHIP