The International Futsal Alliance World Championship was held in Ciutat Esportiva Blanes, just north of Barcelona, Spain from September 9-17, 2022.  The U.S. Futsal National Select Teams did not disappoint as the national select squads took home gold in the Men’s Open, 17U Boys and 14U Boys while the Open Women took home the silver medal.

This is the sixth time the tournament has been held, with previous hosts including China, Scotland, and Spain. After being unable to stage the event in 2020 and 2021 due to the global pandemic, the special edition brought together five different age categories to celebrate international futsal.  The Championship consisted of groups in the Open Men, Open Women, Youth Men (2001-2004), 17U Boys and 14U Boys. 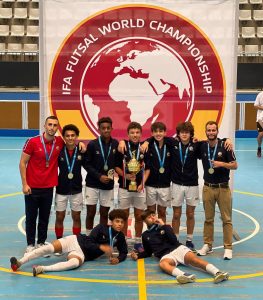 In what turned out to be arguably the best match of the tournament, the 14U U.S. Futsal National Select Team were crowned champions by outlasting Scotland in the championship with a thrilling 7-6 victory. The US team had a small yet well rounded roster. Although offensive players Natnael Atkilti and Luis Oliviera won the Golden Boot award for most goals in the tournament their successes were not individual. Assisted by the team captain Aiden, whose leadership permeated all faucets of the team, Isaac who remained composed “with ice in his veins”, Luis the GK who allowed the least goals in his division and Matias with his ability to execute plays our 14UBoys team went undefeated!

“It was a goal to not just enjoy this experience, but to represent U.S. Futsal with class and create a standard of excellence. U.S. Futsal provided a platform for these young players to show the world what they can do and we are motivated to defend our title and promote the quality U.S. Futsal has to offer,” said head coach, Will Hanna, who hails from Alexandria Futsal. 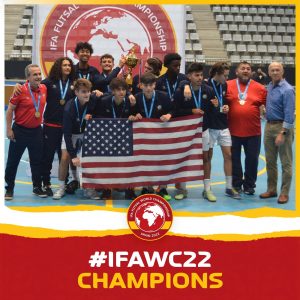 The 17U U.S. Futsal National Select Team also brought home the gold with a tremendous 6-1 performance in the championship match against an Australian side that could not penetrate a stubborn US defense. GK Brandon Barrientos and offensive player Neo Ruiz both brought home the 17U Boys divisional awards for the Golden Glove and Golden Boot. Their successes were fueled by the strong defensive presence of Nathan Rodrigues, Isaiah Anaya and Mateo Anaya along with the offensive skill of Ricky Burton.  Their bench was not to be taken lightly both Matthew Matuidi and Jason Gonzalez did not let up on the defensive pressure while Tin Le and Dayne Kovatchev poured on the offensive skill. “I am extremely proud of the hard work and perseverance of this fine group of young men. I am certain that they will continue to grow and flourish after this remarkable opportunity that we all will remember for life,” said head coach, Mario Gonzalez. 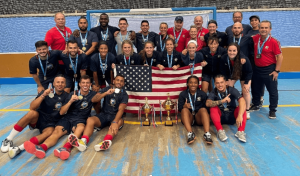 The US Men National Select Team went undefeated with 5 wins in the competition and convincingly defeated Australia in the championship match 8-1.  While the US dominated the men’s competition from start to finish in every match it had some tuff opposition from Scotland, who had defeated the US during the last World Championship in China. Defeating them to move on to the final was very satisfying. 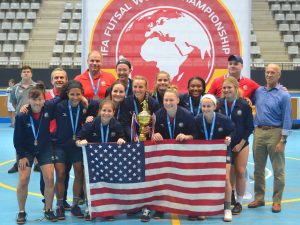 In the Open Women final the U.S. Futsal National Select faced a very well prepared and determined Australia side and fell 1-0 in a very impressive match that set the tone for the future of women’s international futsal. The Open Women’s goal was defended by 15-year-old, Ally Harrison, and 16-year-old, Claire Lindsey with Harrison taking home the golden glove award with only 1 goal allowed all tournament.

“Building a team from around the country allows us to showcase how the sport of futsal is growing in the US,”

said captain, Emily Roose. “It was both an honor and a privilege to represent the U.S. and play alongside these amazing women,” said captain, Lou Arseneault.

About the International Futsal Alliance

The International Futsal Alliance is a partnership of countries that play futsal, formed to offer high quality international tournaments across the World.  There is a limit of one member per country and membership is by invitation.  However, it is expected that all members will both offer tournaments, and support tournaments offered by other affiliated members in order to promote and develop the game.

The IFA Futsal World Championship is our flagship event and has welcomed representative teams from all the continents during its five tournaments to date.  All tournaments are played under FIFA rules and the majority of its members are affiliated to member organization of FIFA, while some are also members from the AMF.  Last year FIFA held its nineth Futsal World Cup in Lithuania.